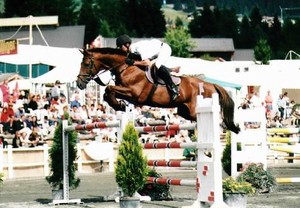 Digne Coeur AA CH is finalist in Promotion classes in jumping in 4, 5 and 6 years. In 1998, he is a “champion vaudois R” with his rider-owner Sandra Montavon. In 1999 and 2000, under Sandra Montavon's saddle, he realizes 27 rankings 130-135 cm, is finalist of the Swiss championship R, of the Swiss championship of the Amazones, of Berner Cup (135 cm) and of Finale Super-Promotion of the stallions. In 2001, under Christophe Barbeau's saddle, Digne Coeur AA CH realized 18 rankings at international level, at Giubiasco, Lignières, Lons-le-Saunier (F) und Royan (F), 140 - 150 and Super-Promotion classes. In 2002, he obtained 23 rankings with the same rider at international level, 140 and 145. He participated in 3 events of category "Grand Prix" 150 cm.